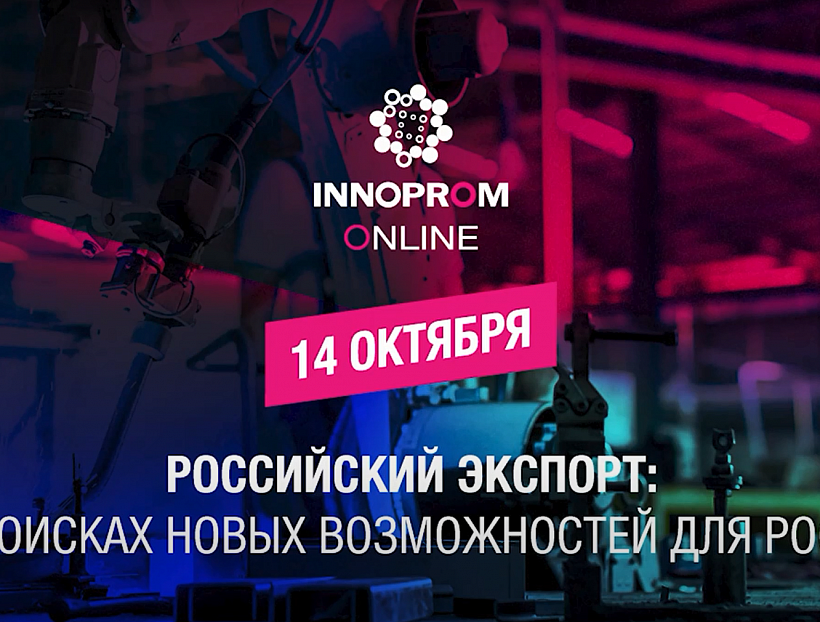 The session was broadcast on the universal industrial platform INNOPROM. During the online conference, issues of changing the structure of Russian exports, searching for new opportunities and tools to support exporters were raised. The invited experts discussed ways to solve challenges in the global market, as well as the search for target markets for domestic products.

Evgeny Pavlov, sales director of “REP Holding”, took part in the event. The conversation was also attended by Andrey Tsemakhovich, director of the department of foreign trade regulation and export support of the Ministry of industry and trade of the Russian Federation; Vasily Kozlov, minister of international and foreign economic relations of the Sverdlovsk region; Nikita Ponomarenko, trade representative of the Russian Federation in Malaysia; Ivan Cash, trade representative of the Russian Federation in Algeria; Maxim Yeliseyev, coordinator of the Project " development of partnership between Russia and UNIDO»; Dmitry Prokhorenko, director of foreign network development at the Russian export center; Dmitry Pradun, commercial director of SIGNAL-PACK; Olga Mironova, head of the export department of “Volgabus”. The session was moderated by Andrey Besedin, president of the Ural chamber of commerce and industry.

Mr. Andrey Tsemakhovich, the Director of the Department of Foreign Trade Regulation and Export Support of the Ministry of Industry and Trade of Russian Federation, said that in the current situation, when domestic markets are under the pressure, when the consumer capacity is falling, for many enterprises the export becomes one of the functions of survival. “The volume of exports of non-primary energy products for seven months reached 49.2% of the planned value of 2020. At the same time, the pace of 2019 was practically maintained. A significant reduction (32% of the planned value) is observed in industrial products, in mechanical engineering there is also a decrease in exports by $ 2.6 billion. The chemical industry lags behind by $ 1.7 billion, and the timber processing complex lags by about $ 0.4 billion. " - the representative of the Ministry of industry and trade said.

Evgeniy Pavlov, analyzing the current measures and instruments to support Russian exporters, mentioned that they are in demand by market participants and develop the exports. "We are quite actively and enthusiastically using the tools of non-financial support from the Russian export center," - he said. - Over the past two years, about 10 events, exhibitions and conferences were organized in different countries. These are really working brand promotion mechanisms. The flow of requests and applications was increased, business contacts became more regular, we find out the positive effect of such cooperated promotion and we are ready to continue this work." Evgeniy Pavlov noted that the company is interested in additional measures of state support for the customers using financial instruments and opportunities of interstate relations.

Among the traditional export destinations of energy equipment of Nevsky plant and “REP Holding” are enterprises of the oil and gas, energy, chemical and metallurgical industries of the CIS countries (Belarus, Uzbekistan, Azerbaijan, Kazakhstan), the EU, Latin America, Southeast Asia and the middle East region.

The international industrial exhibition and forum INNOPROM has been held annually since 2010 in Yekaterinburg. This is not only the main industrial exhibition in Russia, but also the largest discussion platform with the participation of leading Russian and international experts, company managers, representatives of federal and regional authorities. The event is recognized as one of the key tools for the country's industrialization and promotion of the latest Russian technologies and developments. In 2019, INNOPROM attracted more than 43,000 visitors, and 90 countries participated in the event as exhibitors, delegates, and guests of honor. In 2020, the event is being held online.